Walk Down to the River

Walking around the new town for exercise had me dodging free range dogs, a power crew and bad drivers, and finally trudging through a muddy drainage ditch on the side of the road with my legs killing me from wearing flat-bottomed skateboard shoes.

So I bought a pair of ugly, white, old-people looking running shoes imprinted with a big diagonal N and stepped on a rusty old treadmill I paid $25 for, and immediately felt like a hamster on a wheel. The last thing a factory worker needs is recreational interaction with machinery off the clock. I needed a city with sidewalks or a park with hiking trails.

Walking for calorie burning alone is a waste of time, it’s also about exploring and discovery and the silence in the changing scenery. I was in the mood to walk, so I stepped off the treadmill and went out into the small town and walked.

I live in a trailer park that sits atop a hill above a river valley. I started on foot on Main Street down the hill toward the river and came to a bridge. Access to the river on the near side of the bridge was blocked by overgrown briers. I started to cross the bridge, stopped in the middle and took a picture of the Haw River.

Then the town air raid siren went off, left over from The War and now used for fires. The siren back in my childhood neighborhood was used for fires as well, and also to remind everybody it was noon each day. So every time you heard the siren it was either noon, somebody’s house was on fire, or the Russians were attacking.

The siren droned on annoyingly and I thought about the four dogs up on the hill behind my trailer. They’re tied up in the yard of an old falling down mill house with inside furniture on the porch and they howl each time a police siren goes by. I don’t know if they’re howling because it hurts their ears or because they get the same feeling in their guts as I do when cops are around. Dogs are as good as people come, so it’s probably the latter.

That same gut-feeling turned into a paranoid fantasy involving the cops shaking me down for taking pictures on a bridge, the siren sounding to warn them of my treasonous activities. There were articles in the immediate post-9/11 era about local cops shaking down nature photographers who got too close to bridges. A decade later it’s now codified into federal law that anything can be considered terrorist activity and any American citizen can now be detained by the President forever without a trial. I wish that was a paranoid fantasy, but it’s simply the way the powerful behave when the walls of their castles are crumbling all around them, imposing arbitrary rules impossible to follow.

I crossed the bridge, my old-people running shoes tramping over little pebbles and tiny bits of glass. I noticed a little grove on the flat river bank so I took a right on the road leading down to it. There were bluebirds and it was well maintained and peaceful and green in the warm 2012 January.

Over yonder I saw a professor-type with a silver beard and an Indiana Jones hat and outdoorsy vest-jacket, and he had a feminine little poof dog running around freely. Either a professor, or some kind of doctor, definitely a guy with a PhD, a guy who doesn’t mind looking like he just stepped off a page of the LL Bean catalog. You don’t expect to see a guy like that in Haw River. They were nonexistent in my old neighborhood too.

I crossed a walking bridge over a little stream to a parking lot with two park signs. Parks can’t just have plain signs on posts, they have to have big signs built out of logs with tin roofs over them, so bears don’t knock them over, or the raindrops don’t block your view of the park rules, or something. This park was tiny for those kinds of signs, nothing but a parking lot, the little grove, and a big open field where you could play football, or volleyball or even futbol.

The sign said there’s a kayaking trail on the river, and this here was stop #16, and plans were being made for a hiking trail, if only they could get the government and landowners and philanthropists and volunteers and donations from little people like me to work together to make it happen.

The feminine little poof dog came up to me, I said hello but then ignored him so he wouldn’t be alarmed. The professor called the poof dog with more intensity than was warranted for the dog’s size and behavior, I guess because some inner air-raid siren reminded him “we live in a litigious society”.

Then I went down to the river and saw this: 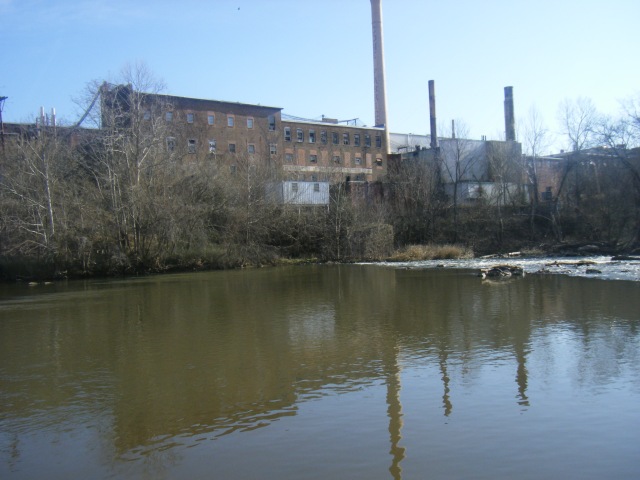 It was precisely the kind of place I sought out for peace as a kid. Greater Pittsburgh is rife with industrial wasteland playgrounds which started to appear in the 1970s and 80s as the steel mills were closing and left to rust. For me the wasteland playground was around Chartier’s Creek – a distributary of the Ohio about as big as the Haw. There were certain spots down there where all you could see was river and forest, so it gave you the illusion of being in nature, but it stunk like raw sewage, because that’s exactly what the towns were dumping into it. The chemicals from industry all the way from Canonsburg to the Ohio River were just settling when we used to go down there and fight and smoke cigarettes and drink Mad Dog and start fires and break glass and try to catch fish but get our lines stuck on garbage, and all the things boys do, or at least used to do, and sometimes I’d go alone and sit for hours and dream about building a raft like Huckleberry Finn and sailing it down the creek, down the Ohio and further down the Mississippi, or jumping the nearby train and taking it to parts unknown.

The town of Haw River is a lot like where I grew up- I hadn’t been up close to a place like the big old decaying goliath on the river since I moved from the Rustbelt over a decade ago. A place where a graveyard of industry sits right up against natural beauty, nature occupying and reclaiming it like the ocean eating a sandcastle, and it’s evident in the broken windows where kids threw rocks and in the grass growing through the cracked pavement, and in the vines crawling up the sides of the crumbling walls and the steel rusting into the color of the dirt below, the bricks tumbling into the river the plant once polluted with its waste, and a monolithic smokestack still with the company name, staring at it’s reflection on a calm stretch of water while it slowly collapses, like Narcissus …

The crumbling old textile mill is the biggest structure that remains in town, and there’s not much else but parks full of beat up old trailers like the one I live in, and little churches, a few remaining mill houses and some worn down gas stations where you can buy bait and beer and hot dogs. About the time my grandparents were born, industry was building places like this. About the time I was born, after decades of labor struggles, when American workers finally got the goliaths to give them a fair living for hard work, industry went abroad to exploit cheaper labor and devastated countless little towns like Haw River and cities like Pittsburgh and left the inhabitants without a future…

Right on the heels of the Vietnam War, I was a borne into an era of no-future. We played amid the wreckage of industry as images of a once great society flashed on Reagan’s campaign commercials and fantastical sitcom reruns, we skipped on crumbled bricks and cut our knees on rusted nails, and our parents didn’t speak about their war in a different way than our grandparents didn’t speak about theirs.

Now we’re getting older and able to finally shake off the poison and disease of industrial waste in all its manifestations and begin to build new things out of the raw materials found in the junk pile.

Down the river South, another old mill on the Haw in the town of Saxapahaw is Cinderella transformed into a ballroom, a beautiful venue for touring bands, with a coffee bar and a view of the sunset from the deck. In the same building is a pub serving high-end food and craft beer, a gas station with a five-star lunch counter with menu items like soft shell crab tacos and sandwiches made with locally raised meats….Across the street, a farmers market each Saturday with more beer and bands in the park, drawing a multitude of Orange County professor-types and feminine dogs intermixed with the natives, a community being built on good food, good beer, good entertainment and in contrast with nearby Truman Show like environs – the pre-fab communities, always creepily clean and uncomfortably well-manicured, and nothing much going on at all.

Of course then the inevitable happens, property values shoot up, pushing out the natives and the artists, as in nearby Chapel Hill/Carrboro in the wake of the famous music scene of the 90s, shooting up alongside vacant “green” condos into infinity and everything disappears into a money cloud.

For now Saxapahaw is a place with personality.. A new sense of community built on the ashes of industry, as the mayor of Braddock, PA is trying to do with bleaker circumstances, as many human beings are discovering this is what we all have to do in our own way, as we watch the pillars of the old industrial/corporate universe give out and the hierarchies we were once subject to crumble into the rivers of time, to make way for the next phase of human evolution…

I walked up the hill homeward and heard the train howl It was only a few Amtrak passenger cars going along the adjacent railroad bridge, traveling old school. I stopped in the middle of the lower bridge and waved up at the train like an idiot. I don’t know if anyone saw me. If I was in there I’d be looking down toward the river.