Donald Trump is the biggest attention whore in America, a teeming nation of attention whores. He is the Man of the Year, no doubt. The 21st Century Cancer, the Alpha Troll, the ultimate pro-wrestling heel, the most devious reality show villain, a spoiled silver-spoonfed billionaire jagoff who is the perfect representation of American politics and the perfect manifestation of the narcissism that poisons popular culture from movies to music to television to social media.

Hatred of Donald Trump does nothing to stop him. In fact, it props him up as much or more than his Murican supporters do. He doesn’t thrive entirely on hatred, like the attention-whore worshippers of a god who “hates fags”, but he thrives on the same hatred that keeps people watching reality shows. Every time you click, like, or comment on a story about Donald Trump, it pushes his toxic brand further. And the more outrageous his statements, the more attention he gets, mostly from people who disagree with him. Since he announced that all Muslims should be banned from traveling into the US, he has been in the media constantly. Other than Murican social media users, I haven’t heard from anyone who agrees with him. It doesn’t matter. He’s not going away. Like everything else that sucks about popular culture — commercials, reality shows, Bieber, selfies — he keeps sucking and sucking and sucking. 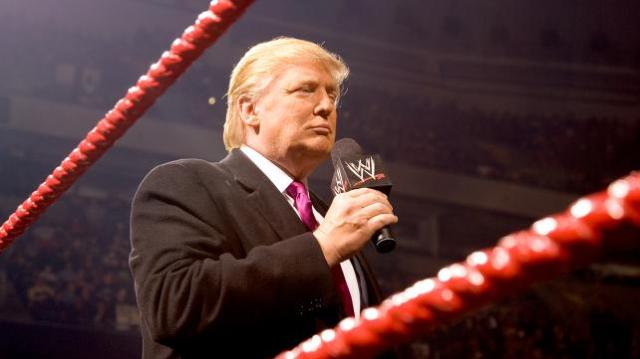 Muricans, his base, love him of course. They don’t care that he has absolutely no interest in serving another human being let alone serving the public. They love that. Nothing Donald Trump says is sincere, and for that he is applauded. Nothing he says has substance, and he’s cheered for it. Is it such a shock that an economically depressed public buys plastic crap dealt to them by an obnoxious billionaire for a temporary buzz and no substantial benefit? This is what we are. Muricans love him not in spite of his massive bullshit and anti-intellectualism, but because of it. Trump is the personification of all the cheap bullshit in our culture that Muricans and even Americans have supported for decades.

The Donald’s supporters will tell you that they like him because he’s shaking up politics, he’s different from other politicians, he’s offering an alternative. Bullshit. His policies, in the rare instances that he speaks about policy, aren’t very different from any of the other Republican candidates. Same shit, different wrapper.

Republican politicians, making a big flamboyant show of condemning him, know that they have created this monster from the fungus rotting on their decaying, dumb souls. Paul Ryan, Lindsey Graham, and Ted Cruz will never acknowledge that Trump is simply echoing the fears stirred up in the people by decades of right wing propaganda.

I suspect the majority of the base of the Republican Party is evangelical Christians, extremists – they’re a mixture – but these are the extremist ones, nativists who are afraid that, you know, “they are taking our white Anglo-Saxon country away from us,” people who have to have guns when they go into Starbucks because, who knows, they might get killed by an Islamic terrorist and so on. I mean, all of that is part of the country, and it goes back to colonial days. There are real roots to it. But these have not been an organized political force in the past. They are now. That’s the base of the Republican Party. And you see it in the primaries. So, yeah, Trump is maybe comic relief, but it’s not that different from the mainstream, which I think is more important.

Trump is, according to his supporters, “outside the mainstream”, even though he’s a billionaire and the “main stream” is coming from billionaires’ pee holes. A man who “tells it like it is” to people who grew up with a steady diet of commercials. Donald Trump says nothing of substance and speaks in slogans, but that’s exactly what Americans are used to.

Robert Reich on Facebook explains this populism, in contrast to the progressive populism of a Bernie Sanders or a John Fetterman:

Populism (the rejection of political elites in favor of the people) has always had two faces. One is progressive populism, based on democratic renewal and widening inclusion. The other is authoritarian populism, based on strongmen who promise fundamental change because they’re so powerful, and also scapegoat minorities. America’s populist upsurges to date have been progressive (in the 1830s, between 1901 and 1916, in the 1930s, and, briefly in the 1960s). But populist upsurges in other nations and at other times have been authoritarian (think of Spain, Italy, and Germany in the 1930s).

Right now America is at the early stages of another populist upsurge. Bernie Sanders exemplifies progressive populism; Donald Trump, authoritarian populism. The question isn’t just whether populism will prevail over political elites in 2016, but which face of populism — progressive or authoritarian?

The Thinking-American public is used to being horrified. We are a civilization in decline, after all. We were horrified about the Bush administration at the dawn of the 21st century. Before that Thinking-Americans were horrified by Ronald Reagan, who I initially distrusted because my Dad, who celebrated his 73rd birthday yesterday god bless him, used to occasionally yell when Reagan came on the TV when I was a child in the 80s. Otherwise I would have thought Reagan was Elderly Superman. Dark haired, white guy, fought the scary Russians, like that scary Russian wrestler Nikita Koloff who once Russian cycled Magnum PI and broke his neck. Or that other scary Russian Ivan Drago who killed Apollo Creed and then Rocky beat him up and ended the Cold War by grunting “I can change. Yous can change. Everybody can change.” I may have never known Ronald Reagan was a cheap, phony, B-movie actor who the intellectual liberal publication the New York Times calls “one of our greatest presidents” while condemning Trump for stating policy positions no less horrifying than supporting the South African apartheid regime. I have my parents to thank for not raising me Murican.

Yes, Ronald Reagan looked great in comparison to George Bush Jr. And as Hunter S Thompson said, Bush Jr made Nixon look like a liberal. The machine keeps grinding us down until a substantial portion of the public accepts Donald Trump — an annoying-as-fuck douchebag celebrity who you wish would be kicked to death by a mule right in his WASPy orange fuck-face– and the rest of the Republicans, though similarly insane in policy, appear sane in comparison.

On the other hand, there’s people like Bernie Sanders for president and John Fetterman for Senate. While the American collective can’t realistically place all its hope on the shoulders of a messianic individual, I’ve never thought as highly of a candidate in my lifetime as I do Bernie Sanders.  Hunter S. Thompson said this about George McGovern at the end of his doomed 1972 presidential campaign….

“The tragedy of all this is that George McGovern, for all his mistakes understands what a fantastic monument to all the best instincts of the human race this country might have been, if we could have kept it out of the hands of greedy little hustlers like Richard Nixon. Where will it end? How low do you have to stoop in this country to become president?”