We all went up to the beautiful Tallgrass Prairie Preserve to see the free roaming bison.  Silent rolling hills of cattle ranches and untouched prairie. The massive bulls really do have a mystical quality to them. Angular silhouettes on the horizon. 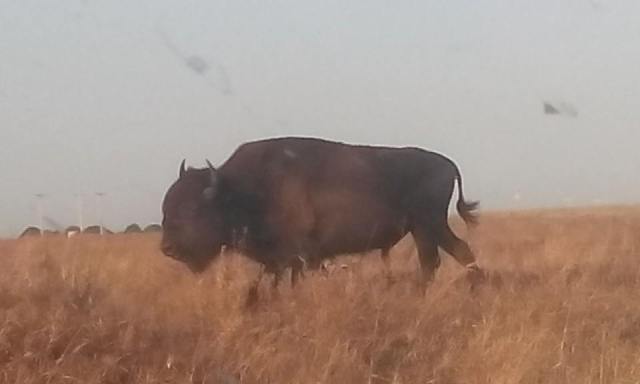 On the last day Redhead’s mom was here I lost my footing and sprained my ankle. It was a hell of a sprain. This was last Saturday and I’m still limping around on it. I was sober at the time. Had I been drunk I could have blamed alcohol.

I made nearly $100 last month on my Christmas album. Half of that went to buying Redhead gifts and most of the rest went to booze, maybe a few bucks for groceries. That’s all I ever buy… groceries and booze. I also like books and music and I’ll buy used books and records on occasion. But I mostly listen to music by dead people so I don’t mind downloading it, and I use the library for books.  Where’s our booze library you promised, Obama?

I rarely buy clothes. I wear my clothes out until they’re in such a condition that St. Vincent DePaul wouldn’t take them. The only pair of jeans I have right now are black with a bleach stain on the knee and a hole in the crotch.

So I’m working on a new album and have been applying to jobs. I must have applied to 50 jobs since I’ve moved to Tulsa last summer. I had one interview through a temp agency, which was a waste of time because they ended up hiring a referral. I have an English degree which makes you overqualified or under-qualified for everything. And Oklahoma is the third state I’ve lived in since 2012, so I look like a drifter on my resume. I wish. Like a drifter I was born to walk alone.

I have an interview on Tuesday at a popular national grocery store. They have decent pay and benefits. It seems like a lot of physical labor which I’m looking forward to, and a lot of customer service which I’m not. But customer service is easier face to face, rather than on the phone, because assholes are pussies.

I haven’t had any booze since Monday. That’s a big deal for me because I go months on end not missing a day. Not because I’m trying to quit but because I have $9 to my name and don’t want to ask Redhead for drinking money. I drink a lot but I don’t often get overly drunk anymore. In my 20s I used to black out about 4 nights a week and get a beer buzz on the other 3. Now I can go through a bottle of liquor in a day and drift off at the end of the night without so much as a stagger. If I get on a kick where I drink too much liquor I can start to feel my blood pressure rise and I’ll switch to beer for a day or two, then maybe wine. I don’t get hangovers unless I drink a lot in a short period of time. Even then all I need is enough sleep and I’m up pouring the leftovers for breakfast.

But here I am sober three days. I drink coffee in the morning, english tea in the afternoon and herbal tea at night. It’s not bad. I had a doctor once who was surprised I didn’t get delirium tremens when I gave up booze for Lent. If I really wanted to I’d have no problem quitting but I don’t see the point. And I don’t see why you can’t discipline yourself to drink in moderation if you can discipline yourself to quit entirely. I told Redhead’s mom that I’d either need to give up food or booze because I like too much of both. Food doesn’t give me a buzz.

But I’m getting a liter of bourbon on Saturday. It’s Lemmy’s funeral and the Steelers are in the playoffs.  Lemmy’s funeral is being streamed live on Motorhead’s Youtube page, which is bad ass and kind of funny, like Motorhead.

I went to an open stage on Monday at a bar formerly owned by Leon Russell. I played three songs and made three friends. I’m going to do this twice a week at least. It was good to meet people.  I got on the radio here in Tulsa already but I don’t have many people to hang out and drink with. Plus I have no money to drink with.

I want to get this solo shit together. I’d rather be in a band but that’s out of my control. It’s too much to get a band together, people my age have lives and commitments and I don’t have money to pay them. But I want to go on tour months out of the year and eventually make some kind of living between that and freelance writing, which I’ve made a few pennies on this year.

The greatest moment I had in my life was touring with my band for a month around the country. It’s the only time I felt like I was doing exactly what I was supposed to be doing.