Peaceful Protesters Roughed up by Trump Supporters: A Journey into a Reality Built by Greedy Maniacs

Oral Roberts was a brilliant liar. With his Hitler-like powers of oratory, Oral created his own reality and broadcast it over the airwaves, generating millions of tax-free dollars donated to him by millions of American rubes.

To those of us on the outside, the televangelism Oral Roberts pioneered seems blatantly fake and insane. But he ran a line of bullshit through the American Bible Belt as far reaching as lines of rail in civilized countries. Most of us can’t conceive of sending money to some goofy, horrible actor who claims a 900 foot Jesus talks to him, and that God told him personally that if he doesn’t collect $8 million, he’ll be swimming with the fishes in the Arkansas River. But the rubes bought the bullshit, and blue haired, uneducated old ladies sent him their life savings, thinking he could heal them.

And he did it all from my current home of Tulsa, Oklahoma.

Those dollars created skyscrapers, a prayer tower, a giant statue of Oral’s hands, folded in prayer, and the Mabee Center, seating 10,000 or so, where, over the years, there performed a lot of Oral.

It was an overcast morning. The CityPlex Towers (formerly the City of Faith hospitals where the 900 foot Jesus appeared to Oral) are three skyscrapers that jut out in of the middle of nowhere, like the Emerald City. The clouds hung around the top of them adding to the Oz vibe. “Optimistic Voices” (The “You’re Out of The Woods” song) played in my brain, as though I just skipped out of a snowy poppy field on a chilly January day. Unfortunately all I had in my blood was ibuprofen for a sprained foot. And a nip of 100 proof vodka mixed with black cherry koolaid in the car after I parked.

All the folks parked at CityPlex made a slow pilgrimage across a great field of dead grass and mounds of mud to the creepy, space aged campus built in the late 60s to attract the young people. Oral Roberts University has become one of my favorite spots in Tulsa for it’s weirdness.

The line at the Mabee Center snaked around the parking lot and up toward the prayer tower, a line full of a diverse group of off white, to very white people. The only black people I remember seeing all afternoon were working there. A guy was walking around the line selling buttons with slogans like “Bomb the Shit out of ISIS” and other sayings the Muricans would like, and he seemed to be doing okay. I liked him, he was funny. I had no idea if his politics were sincere, but can you blame a guy for making money off these rubes? And what an appropriate place to take cash from rubes. 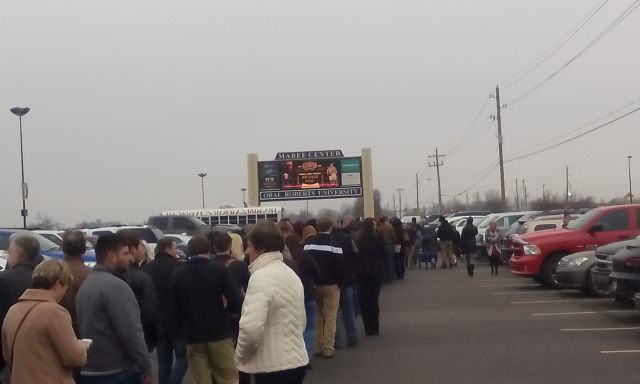 The reason for the long line was caused by only a single door being open, which upon reflection was almost certainly a show business decision on the part of Trump’s organizers so the cameras would show the long lines. Protesters lined up along Lewis Avenue, holding signs like “Trump KKK Rally ->>”, and “No Hate in the 918”.  A few Trump supporters yelled at them, some just wanted to take their picture and did so with a smile on their face. And I figured if I couldn’t get in, I’d go stand with the sane ones.

But I wasn’t here to protest, I was here to get front row seats to the freak show.

Just after the above gloomy photo was taken, an event volunteer, a blond woman in red/white/blue came around to tell us several other doors had been open, presumably after media took enough pictures of the line. I sprinted to a very shorter line for another door.

Through the metal detectors, I found out my reservation meant absolutely nothing as no one was scanning them, and managed to find a seat positioned at center stage in a packed venue.

ck curtain hung behind the stage, sectioning off part of the venue. On the stage were American flags interspersed with Oklahoma state flags. And the podium with that Dickensian name in all caps, insisting:

The crowd waited, and waited, and waited as, sadly, Elton John, The Rolling Stones, and the Beatles played over the sound system, the same handful of songs in a loop. Great music used for these purposes was cause for depression for the sane people who attended. The crowd became restless and booed as “Rocket Man” played a 4th time, then a 5th.

Finally there were stirrings among the security staff. A man brought a stack of papers to the podium. The crowd cheered, thinking somebody was finally about to speak, but the man went down the stairs, and the crowd booed again. Making them wait is textbook show business.

About an hour and 10 minutes after the slated start time, Trump finally appeared from behind the curtain to cheers from the Muricans. He spoke briefly and introduced Sarah Palin.

I started to giggle when she came out in her leather skirt and fuck-me boots, and when Palin spoke I laughed so hard tears were coming down my face. I bit my shirt to keep from laughing out loud. Then came side looks from my neighbors in the stands. They may have thought I was crying with the rapture of seeing such a force of Murican-ness. But I was like a toddler watching a cartoon. For some reason she was funny to me, a silly clown.

As usual she rambled through and hit the lines that the Muricans wanted to hear. The media in the past 24 hours has made much about her blaming Obama for not taking care of veterans, like her son, who was just arrested for domestic violence. She sounded a bit drunk the whole time, but when she spoke of her son, and Obama’s indirect role in his arrest, she was holding back the tears of a crazy lady desperately trying to hold on to a more comfortable version of reality than the truth.

Palin did offer a tiny bit of substance, however. She spoke to the frustrations of not just the Muricans but Americans as well. She spoke of joblessness, and the distrust of the establishment. Part of her speech could have been written by a drunk Bernie Sanders. However, the causes of the problems mentioned and the solutions are batshit crazy. Answers based on unevolved hatred and gut reactions rather than intelligent analysis and compassion. It’s ISIS, it’s illegal immigrants, it’s poor people, and on and on. All these answers that have kept the working class down for decades, and dangerously drawn to messianic clowns. Trump is a billionaire, yet one of us, she said to the crowd of citizens. But we can root for him, because he’s not part of the establishment.

Trump spoke, and it was, like Palin, his own brand of gibberish, sloppy meandering, saying nothing of substance, but hitting all the notes.

After a while the protests started. some shouting, but many were silent.

At first, the protests seemed to fuel the crowd. Trump, who has a history of involvement in the WWE, takes pleasure in saying “Get ’em out!” Not very far into the speech people began walking out in droves, with their Trump signs, having waited for hours (the venue opened at 10am), and were content to see the celebrity, and why sit through the whole speech if he says nothing? The protesters added excitement in the audience, acting as pro-wrestling heels, and keeps the crowd in their seats… so much so that I was wondering if Trump had planted some of them.

Trump, the candidate with by far the most media coverage, then turns to the media platform, explaining that he loves protesters because it’s the only thing that will get them to turn the cameras and show the big crowds he’s getting.

Suddenly, in front of where I was sitting, on the landing to go into the lower section, two men stood silently and embraced. The crowd began booing them. A man in a baseball cap, goatee and plaid shirt, who was sitting in front of me the whole time, who had elbowed my knee and apologized several times, and who was quiet through both speeches, rushed down in front of the silent protesters and got in their faces. I got my camera out. A few of the protesters’ friends came to stand with them. The man was telling them to get out. The protesters did not move, so he shoved them. They continued to stand their ground. The man in the white shirt was Brandon Smits

Then a big fat Boss Hogg looking guy with a cowboy had ambled down the stairs, grabbed Smits in a headlock, and attempted to drag him upstairs. Security rushed in saying “Hey Hey Hey” to the cowboy, and also grabbed Smits by the shirt. Smits stood for a moment, and just before he was escorted out, flipped Boss Hogg’s hat off. Trump began wrapping up his speech as they were escorted out. Here’s the video I shot:

I caught up with the protesters and spoke to them a bit in the parking lot afterwards (video forthcoming). Brandon was wearing a shirt with “We come in Peace” written on it, and a yellow sticker with “Mexican” written on it. We speculated as to whether Trump wrapped up early, noticing that things were starting to get ugly in the stands. Which would mean that the protesters effectively shut down the rally. They, much like Rose Hamid (the Muslim woman ejected from a Trump rally in South Carolina), decided to protest Trump not by shouting loudly, but by standing silently. They briefly recounted what happen. A friend said a man told her “I’m not afraid to punch a woman.”

I’ve been to pro wrestling, and I’ve been to campaign rallies, and this was pro-wrestling, but with thousands of people who don’t realize it’s entertainment, much less possess the ability to fathom the disastrous results. Trump and Palin are creating a bizzarro world in politics, a power apparatus not built by any substance, but by hallucinations about Muslims, Mexicans, liberals already flowing through the public like the poisoned waters of Flint, a reality where Trump is the 900 foot Jesus that will save the good and cast out the evil. As funny and cartoonish as these strange mega-celebrities seem,  their success in the political realm means doom. Their followers are loyal. Dragging people out for disagreeing, denying denying denying in the face of truth. Denying what was plain as day in my video. This is the stuff of beer hall putsches. No amount of logic could have kept the blue haired old ladies from donating their life savings to a greedy pig like Oral Roberts. No amount of logic will stop the Muricans from lying themselves into a warped, horrifying vision of reality, which Trump and Palin are all too happy to profit from.

Sloover is a freelance writer and musician from Pittsburgh PA living in Tulsa OK.

4 Responses to Peaceful Protesters Roughed up by Trump Supporters: A Journey into a Reality Built by Greedy Maniacs