I don’t know people. I can’t get hired here. When you can’t get a job as a shipping clerk or a Trader Joe’s crew member what the fuck are you gonna do? The economy is bad out here. And a bad economy in a Republican state may as well be a desert. Not like we have liberal democrats running things elsewhere but my god man. The oil industry is in the slumps and the fat cats and their concubines in government are using it as an excuse to tighten the purse strings. Teachers get paid peanuts here. I’m drinking vodka on credit. My lady is keeping me out of debtors prison. I’m supposed to keep the house clean but the kitchen is a mess.

Part of the reason it’s a mess is that I’m learning how to bake things. I just made a dozen bagels, they turned out ok for a first batch. Boiled them and everything. In 2013 here in Oklahoma was passed a cottage food law that stated you could sell baked goods out of your house, to not exceed $20,000 in sales, as long as you put those baked goods in a package and put a sticker on said package saying these were goods baked in a facility that the state didn’t inspect. Well okay then. Redhead makes excellent cookies and I make a damn fine sweet potato cake. And as far as I can tell there’s only one bagel shop in town that makes them east coast style, so it’d be a good skill to learn. 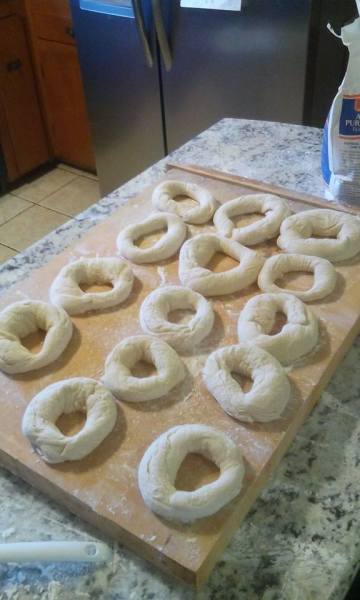 I’m also thinking about setting up a Patreon. Patreon is a website that allows people to donate to you for creative endeavors. Like if I promise to write a blog every week, and an essay every week, make a podcast every week, make a video twice a month, how much money per month would you give me? I don’t know, but I see people getting a couple hundred a month on there for doing heavy metal covers on a banjo and mandolin and taping it, I’m interested. Would you be? I’ll set the thing as low as $1 a month.

I don’t know what it is, but I’ve got hold of a nerve that makes things go viral. Last week as documented here on Sloover.com I took a video at a Trump rally that’s nearing 50,000 hits last time I checked. A sticker I used to put up around Pittsburgh got tweeted out by this band I jammed with for a few months called the Beagle Brothers, and the mayor of Pittsburgh replied to it, and then it was mentioned by Mike Pintek on America’s oldest radio station, KDKA radio. Weird random shit, I would have loved it if something I had actually worked on got attention. Before that I had a Craigslist ad go viral, and Shooter Jennings saw it and invited me to his gig where I drank whiskey with him backstage. This is all from nothing, it seems to me, just dumb luck and me being funny in an attention grabbing way, I guess. Forget all the shit I actually worked on, like essays and research pieces I spent hours and hours on for 30 hits, a podcast I spend countless hours on, and the band I spent years in. None of that I regret. But to take a minute and 44 seconds of video and have it seen by 50,000 people, or write some dumb ad when I was drunk and have it be seen and appreciated all over the internet. It seems wrong and weird.

When I first got out of college I probably read a book every week. A novel, a history book, a philosophy book. I had spent 4 years reading what I had to read for college, and then coming out with the urge to read what I wanted to, I learned more in the next 2 years than I had the previous four. I went through all of Bukowski, all of Kurt Vonnegut, all of Mark Twain, Henry Miller, Emma Goldman, and others, all in the span of a couple years, mostly spending time in Davis Library at the University of North Carolina in Chapel Hill. In the last, damn, nearly a decade, I spent time reading the internet and only maybe a book a month, then one every three months. Snippets, clickbait, news stories, politics. Much of it very substantive, but very fast, very temporary and fleeting. Not like Moby Dick. I sure haven’t tackled as many white whales like I used to.

I don’t know what it means. I don’t know if it’s good for me or bad for me. I don’t think good for you/bad for you framing works for any real insight into the nature of things. Sure I’m reading a few books at any one time, all the time. I’m reading a Philip K Dick novel and a book on Nazi doctors right now, but it takes me a lot longer.

We went to some wineries this week. I wanted to talk about that. The one winery had this elegant website and it turned out to be two old people at the end of a dirt road serving wine out of their garage. I don’t know why they had an elegant website like it was goddamn Northern California. I’d rather it be a Geocities site that says “Ed and Edna Make Wine in their Bathtub”. They were a nice old couple. The old lady said her mom’s family was from Meadville. It was just me and Redhead in the garage. Their fruit wines and whites were excellent and their reds tasted like something made in a prison toilet. I’d give them nothing but 5 stars on Yelp though.

We went to another one which was more fancy and overpriced. It’s Oklahoma wine. New wine and new wineries are by nature not as good as old stuff. I’m not an expert but French wine is the best I’ve ever had. It tastes old. And it’s subtle. It’s a tradition passed on through generations. Sweet fruit wine here and in North Carolina is excellent, because it’s traditional. In any kind of agriculture, winemaking included, it takes time. When I was a farmer I soon found out that when you learn a lesson, it takes a whole nother year where you can apply the solution.

I don’t know if it ties in with everything else I was talking about. But maybe it does.

We’re digging our garden tomorrow. Maybe go out and see some comedy tonight.

I miss you guys.