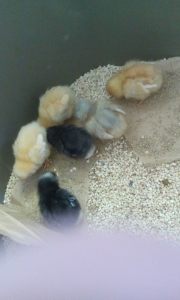 rday before Easter while Jesus lay in a tomb waiting to rise from the dead, Redhead and I drove out to the country store and bought some week-old baby chicks.

We’re allowed 6 hens in the city limits of Tulsa. Baby hens are called pullets. Baby cocks are called cockerels. You can’t have cocks in most cities, because cocks are loud. Therefore, many cities have adopted misandrist policies against cocks. Alert the cocks rights activists.

I used to raise both egg layers and meat chickens on a farm. Unless you’re paying $50 or more for a heritage breed chicken, all the chicken you buy at any grocery store are the breed known as Cornish Rock Cross. They grow from a little yellow puffball to a big white blob of meat in 6-8 weeks, making them very economical. Then you kill and eat them. The most Cornish Rock Crosses I’ve raised in one year on pasture was 4500. As far as I know I was the 2nd largest pastured poultry operation in the state of North Carolina that year. However that pales in comparison to the average conventional chicken-house operation.

Raising hens for eggs is different, because they can lay for a few years. I expect to have these girls for up to five years. We’ll be getting more eggs than we can eat, so if you’re in the Tulsa area and you want to get a barter system going this fall, I am down with trading.

Chickens aren’t very difficult if you manage them properly. All they need as chicks are clean water, high-protein chicken feed, a heat source and clean bedding. You have to be careful they don’t get too hot or too cold. I started mine off in a rubbermaid storage bin. But they grew out of it so I cornered off a 4×5 section of the shed. That’s a better deal for them because they can get right under the heat lamp if they need to, or go all the way to the other corner to cool off. Plus it’s teaching them how to run around and scratch which will be good training for outside. This week I plan on building some little roosts for them out of bamboo.

The first thing I planted was a patch of garlic last fall. Plant it in the fall, cover with mulch, and let it sit over winter. I used leaves for mulch. Here’s how the garlic looked yesterday.

It was looking a little thirsty, but I held off since I knew it was going to rain last night.

I should have started a bunch of stuff earlier indoors, but since we had a 10 day trip at the beginning of March, I direct seeded most of my stuff. Some of it’s doing very well. Others not so well.

I planted onions from slips I bought at Stringer’s Nursery. It’s a sweet red variety, which are my favorite. Back in the farm days we used to grow a variety called stockton sweet, which were the best. I think whoever was selling them let the variety die out, which sucks. 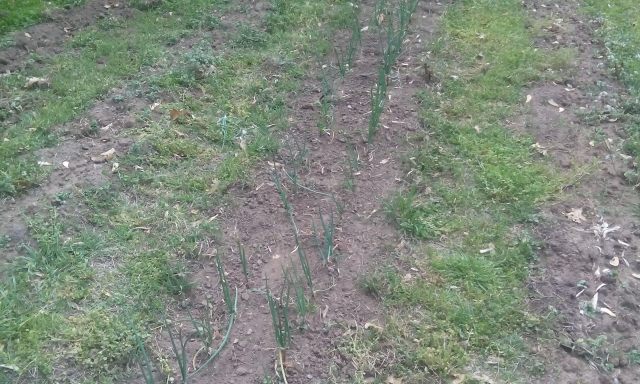 Radishes are doing quite well. They’re even bigger after last night’s rain. I have to thin out the greens today so the bulbs will have room to grow:

Tatsoi, broccoli raab, kale, mustard greens, and chinese cabbage are all showing potential. My spinach didn’t take, as the seeds were too old. And the arugula never germinated.  The two lettuce varieties are starting to come up. 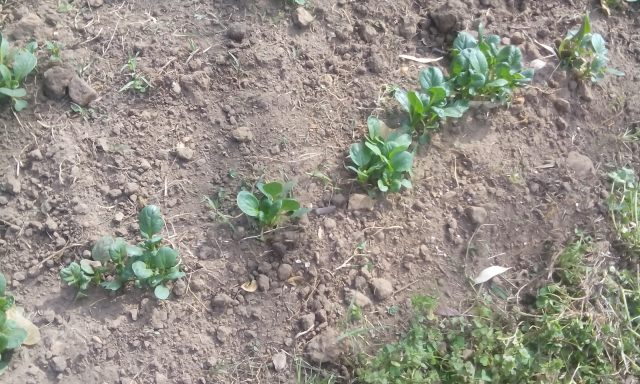 The most exciting thing to happen yesterday were my potato plants came up. I counted 28 individual plants. I bought five different varieties of seed potatoes from Stringers several weeks before planting and keep them in the house so they’ll start to sprout. You cut them up into pieces with at least one sprout on them and plant the pieces a foot apart. I planted them about the week of March 20th (a general rule of thumb is to plant potatoes on St. Patrick’s day, harvest around the 4th of July, in my zone anyway).

The next step is to let the plants grow for a few weeks, then hill them. On the farm we had discs that we attached to the tractor to make a mound around the potato plant. This year I’ll be doing it with a shovel.

Around 4th of July time we should be able to harvest at least a few pounds of potatoes with our bare hands.

Check back in about two weeks if you’re interested in gardening and chickens. I think a bi-weekly update is in order.

I love the weather here in Oklahoma. Warm, blue skies, the occassional tornado. But it does have it’s dry spells with all those blue skies. A garden needs a good rain to really get going, and last night we finally got one.

Here’s the garden from the window this morning, loving the rain: 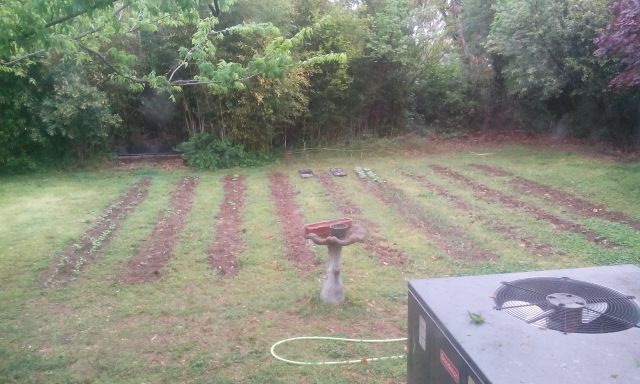